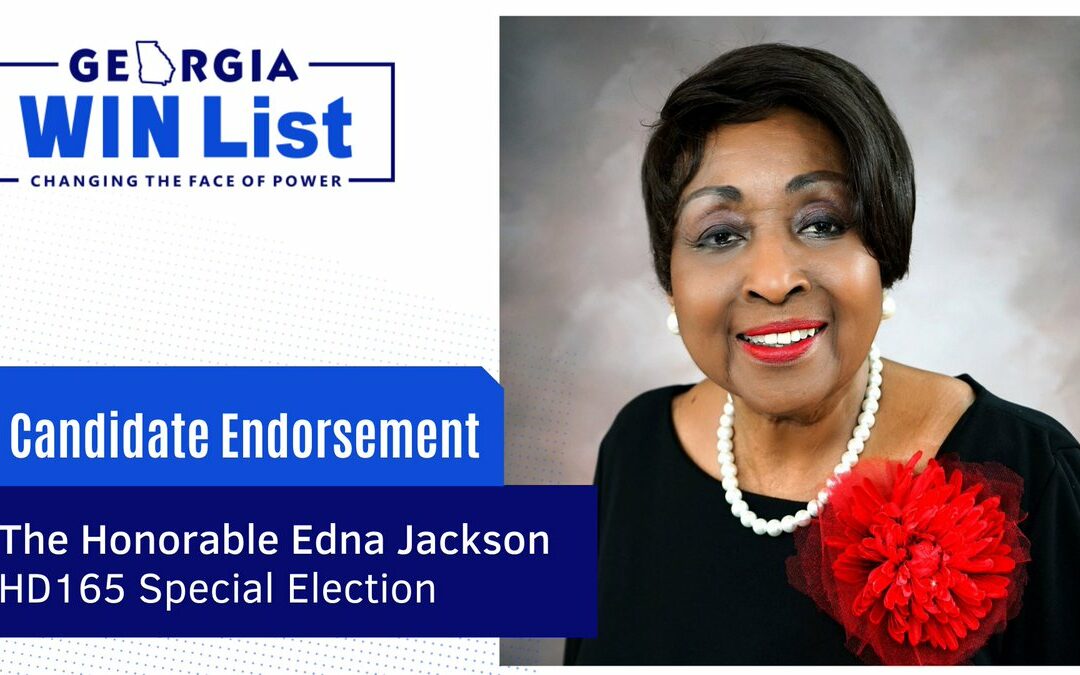 Stephens and Jackson were grade and high school classmates who worked alongside each other as community servants and later as elected officials, Mayor Jackson said when asked why she decided to enter the contest to finish the legislative term at a time when district lines are about to be re-drawn and voter suppression issues are at the forefront of legislative debates.

“Former Mayor Edna Jackson is a legendary civil rights and government leader in Savannah. She is well-connected across the state and possesses deep knowledge of municipal government issues which will be valuable to legislative debates during the 2022 legislative session,” said Murem Sharpe, a Savannah resident and member of the Georgia WIN List board. The Georgia WIN List political action committee has worked for 21 years to “Change the Face of Power” by electing pro-choice Democratic women to the Georgia General Assembly and statewide office.

“Edna already knows her way around the Capitol and has years of experience with many of the key players,” Sharpe said. “Savannah will be well represented when she joins the local delegation because she is so well respected for her many decades of service, leadership and especially her mentorship of younger women and men in politics. Not since 2009 have we had a woman representing the state’s fifth-largest city under the Gold Dome.”

A native of Savannah, Jackson attended Alfred E. Beach High School and then earned both her bachelor’s degree in sociology and master’s degree in political science education from Savannah State University. She served as alderman at-large on Savannah’s City Council for three terms, and mayor pro tempore for two terms before making history as Savannah’s first African American woman mayor, serving for one term beginning in 2012.

Jackson has served as the vice-chairman of the Chatham County Democratic Executive Committee, as a member of the board of representatives for World Trade Center Savannah, and as a chairperson of the Chatham County Hospital Authority. She was also a member of Delta Sigma Theta Sorority, Inc., St. Phillip A.M.E. Church, the U.S. Selective Board, and the Georgia Advisory Committee for the U.S. Global Leadership Coalition.

Congressman John Barrow appointed Jackson to serve on the Military Academy Selection Committee and the Regional Committee of the U.S. Civil Rights Commission. She has also served on the Board of Directors for the Savannah Regional Second Harvest Food Bank and on the board of the Equal Opportunity. She is a Mayo Clinic-trained WomenHeart Champion and serves as co-leader of WomenHeart Savannah.

The Edna Jackson campaign website is: www.edna4ga165.com. Our endorsement video is: www.bit.ly/WIN-EdnaJackson

For 21 years, Georgia WIN List has helped elect more than 80 women to the General Assembly. The group also works to recruit and train candidates and promotes the work of women in office with a heavy social media presence capturing more than one million impressions during 2020. In Georgia, 33.1 percent of the 236 legislators are women. Democratic women outnumber their Republican colleagues by a 3.3 to one margin. Georgia leads the nation for both the number of Black women holding legislative seats and the percentage of Black women legislators.