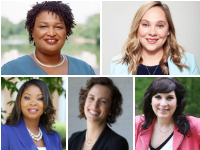 Victories For WIN List Candidates Would Change the Face of Power

Electing the dynamic duo of Stacey Abrams and Sarah Riggs Amico at the top of Georgia’s November ballot would immediately give Georgia a historic power shift. Victories for the down-ballot WIN List endorsed women would also make history and signal major shifts for the offices regulating insurance and utilities. While the balance of power in the House and Senate shifted some for the 2017 session after a handful of legislators resigned to seek higher office, victories for the 21 WIN List endorsed legislative candidates would dramatically rock both chambers.

Janice Laws would become the state’s first female Insurance Commissioner and pledges to reign in skyrocketing rates and restore integrity to the scandal-plagued department. Over at the Public Service Commission, where utility companies usually get their wishes granted, Lindy Miller and Dawn Randolph would become the first Democrats to serve for many terms. They pledge to consider the interests and pocketbooks of consumers in the decision-making process.

In the 56-member Georgia Senate, Senator Jen Jordan’s victory in a 2017 special election removed the long-held GOP Supermajority. The election of a few more women would strengthen the Democratic caucus and force Republicans to negotiate more frequently.

Sally Harrell, a former House member, is challenging Dunwoody’s Fran Millar, who serves as Chair of the Higher Education Committee and Secretary of the Rules Committee. Also of interest, Millar represents a carefully drawn district which makes him the GOP’s key vote in four key metro area caucuses: City of Atlanta, DeKalb County, Fulton County, and Gwinnett County. Electing a Democrat to Senate District 40 is a “gut-punch” for the GOP’s carefully gerrymandered maps.

In Senate District 48, where the previous Senator David Schafer had served as Senate President Pro-tempore before a losing bid for Lt. Governor, WIN List Endorsed Zahra Karinshak is a strong favorite. She brings a sterling resume to the race: USAFA graduate, decorated veteran and intelligence office in the Air Force, honors graduate of Emory Law and a former Federal prosecutor.

Other potential power shifts in the Senate include Senate District 46 where Marisue Hilliard hopes to unseat Majority Leader Bill Cowsert, who is also brother-in-law to gubernatorial candidate Brian Kemp.

In neighboring SD 47, Dawn Johnson hopes to unseat Frank Ginn, who is chair of the Regulated Industries and Utilities Committee.

In challenging SD 56 incumbent John Albers, Ellyn Jeager would remove the chair of the Public Safety Committee who also serves as Vice Chair of the Finance Committee.

There are similar major power shifts in store for the State House when key WIN List Endorsed women WIN their races for seats across the state. Read about those power shifts in a blog post HERE.

Thanks to the generosity of our grassroots donor base, Georgia’s WIN List has presented checks totaling more than $90,000 so far this year. We hope to write an additional round of checks before Election Day. Your contributions help our endorsed women smash Georgia’s stale, pale, patriarchy when we WIN in November.

Stand With WINning Women – All 2018 Endorsed Women after the historical check presentation.

Your generosity helps our WINning women change the face of POWER in Georgia!