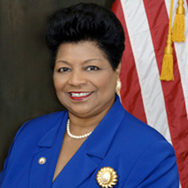 Gail Davenport was first elected to the Senate in 2006, representing District 44 which includes portions of Clayton and Henry counties.  She was re-elected to that position in 2010. During the 2006/2007 legislative session, she served on the Higher Education, Interstate Cooperation, Public Safety and Homeland Security, Retirement and Urban Affairs committees.

Gail is a native of Atlanta and received her bachelor’s degree from Spelman College. She is currently the Business Development Director for RAINBOW PUSH Peachtree Street Project, an initiative of the Citizenship Education Fund, a multi-issue international organization uniting people of diverse ethnic, religious, economic and political backgrounds to continue the struggle for social, racial and economic justice founded by Rev. Jesse L. Jackson, Sr.  She is also a real estate professional with Coldwell Banker Success 2000 Realty having worked in the real estate industry for the past twenty (20) years.  She has served on the National Association of Real Estate Brokers, Atlanta Board of Realtors and the Empire Real Estate Board.

Gail has been an active community leader and volunteer. She is a member of the American Business Women’s Association, National Council of Negro Women, United Negro College Fund and several others.   Gail is also a member of the Andrews Chapel United Methodist Church.