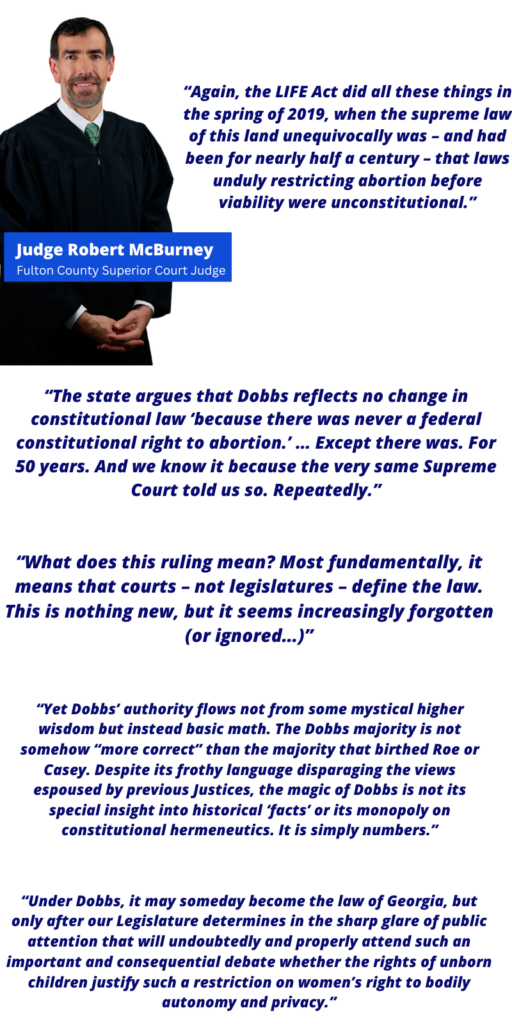 Fulton Superior Court Judge Robert McBurney has overturned Georgia’s 2019 abortion ban based on the fact it was unconstitutional when passed, thus setting the stage for both higher court appeals and Republican sponsored legislation during the 23-24 legislative session.

The appeal centers on the legal concept of void ab initio, which means any law which is  unconstitutional at the time it is passed is null and void. The ruling also underscores the strength of Georgia’s privacy laws and acknowledges the General Assembly may well choose to pass new laws based on the 2022 Dobbs ruling – inviting “the sharp glare of public attention” to those debates.

The 15-page opinion issued Tuesday afternoon is well worth reading in its entirety not only for the selected quotes in the slides above, but for the much-acclaimed legal writing style of Judge McBurney, who attended Harvard for both undergraduate and law school degrees. Read the entire opinion here and do not ignore the footnotes!

Georgia WIN List congratulates our allies and the attorneys involved for their superior court victory. We wish them well as they continue the fight once Republican Attorney General Chris Carr files his promised immediate appeal.  For additional information about the case and reactions to the ruling from the groups who filed the lawsuit, please refer to a blog post which includes those statements, the ACLU press release and a link to the ACLU overview of the case.

For 22 years, Georgia WIN List has worked to train, recruit, elect and re-elect the women legislators for a time such as this. When the General Assembly convenes in January, there will be a record-setting 50 WIN List Endorsed women serving under Georgia’s Gold Dome. These legislators will be effective advocates to argue against the expected Republican legislation to limit access to reproductive health care options and medical autonomy for women.

Already, meetings are being held with women who will run again in 2024 or plan to run for the first time. The WIN List board meeting agenda for this evening includes plans for updating a “best practices” study for legislators and offering training opportunities to the newly elected 14 women who will begin service in January. We will discuss how to join forces with allies to create “the sharp glare of public attention” these issues deserve and which the judicial opinion challenges us to produce.

The fight to preserve reproductive freedom for Georgia women is one we will see play out in the courts and under Georgia’s Gold Dome for many years to come. Please show your support for this mission with your generous gift today.

P.S. – Please help us expand our network by sharing this e-blast with several friends and encourage them to sign up for e-mails, to make a contribution and to follow us on social media sites. When the General Assembly convenes in January, we will need an “all hands on deck” approach for the fights ahead!